Image: Detail of The Leperous Hands, 2016, by Karina Thompson. Photo by Douglas Atfield.

The title of the exhibition was taken from Dorothy Caldwell’s worried reaction to a commission brief, when she asked herself: ‘What do I need to do to make it OK?’. The works in the exhibition use stitch and other media to explore damage and repair, disease and medicine. Through the generous support of Arts Council England, the five artists have not only shown existing pieces, but have also been supported to create new works over the period of the exhibition tour and in response to its themes, so the exhibition has taken on a new life at each venue it has visited. There is information elsewhere on my blog, but here it is drawn together and updated. 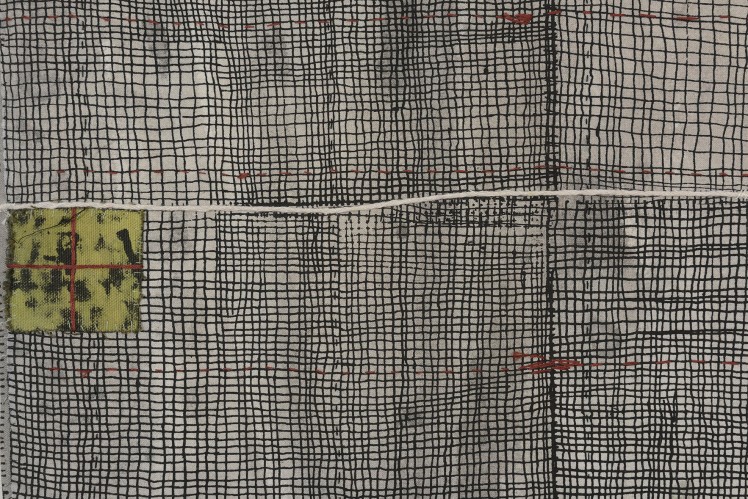 Acclaimed and award-winning Canadian textile artist Dorothy Caldwell is fascinated by landscape, creating hand-stitched, semi-abstract works of layered cloth which explore human visualisation and impacts on the natural world over the centuries. She travels extensively, undertaking research, residencies and teaching in diverse places: India, Japan, the Australian outback and the Canadian Arctic. Caldwell’s work is in major collections in Canada, the USA and Thailand. In 2017 she is teaching in the USA and Italy.

The exhibition also includes Freddie Robins, who combines precision machine-knitting with hand-crafted and found objects to examine unsettling themes of crime, illness and fear, such as her work Basketcase which evokes the use of the guillotine in the 18th century French revolution. Disruption of the perceived rural idyll has preoccupied her in recent years, as evidenced in her recent series of reworked picture jerseys, Someone Else’s Dream.  Robins has recently shown new work in Between Things at The Minories, Colchester and Strangelands, Collyer Bristow, London (until 4 October 2017).

Artist Celia Pym’s passion for process led her to ‘knit’ her way across Japan, giving new life to discarded garments. Pym, who is also a qualified nurse, has been part of the Craft Council’s Parallel Practices project: in 2014 she was in residency at Kings College London in the medical students’ dissecting room, where she explored the links between repairing textiles and healing the human body. In 2017 she has been nominated for both the Loewe Craft Prize and Women’s Hour Craft Prize, which will be on show concurrently at the V&A Museum, London. 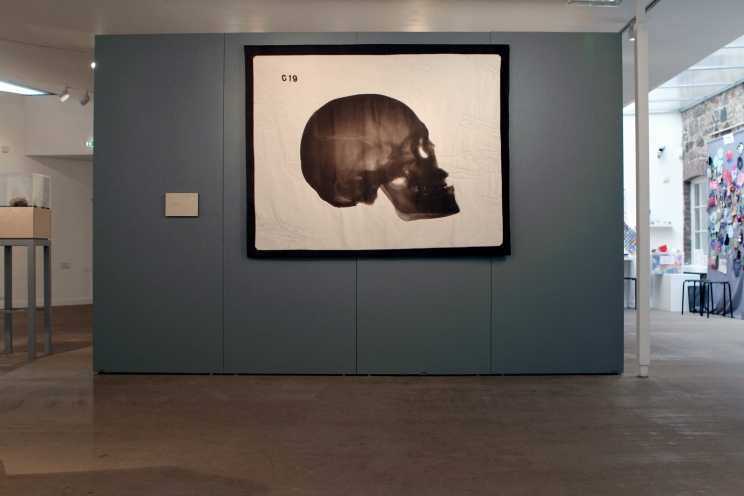 Karina Thompson, a member of the prestigious Quilt Art group and another artist who is part of Parallel Practices, also explores the world of medicine in her layered, machine-stitched wallpieces. Thompson’s pieces in What Do I Need to Do to Make It OK? use high-tech embroidery to interpret complex medical data, such as cardiology scans and researchers’ x-rays of leperous limbs. Her work varies greatly in scale and has often been made in response to places, from 18th Century industrialist Matthew Boulton’s home Soho in the West Midlands, to the immense disused spinning room at Salts Mill near Bradford. The fifth artist featured in the exhibition, Saidhbhín Gibson, is based in Ireland but widely travelled and she focuses on humanity’s interaction with – and impact on – landscape. Gibson’s intricate works, often small in scale, feature subtle, stitch-led interactions with natural objects, such as her series of “repaired” leaves she created for her Make Good, Make Better project. After completing her MFA in sculpture at NCAD, Dublin in 2016, Gibson has subsequently created a new public artwork in Carlow, Ireland; exhibited in Art Works 17 at Visual Carlow; and her new work Oak Leaf Table (2) has been acquired by OPW, the Irish Government’s official art collection.

The exhibition opens on Saturday 16 September and runs until Saturday 4 November 2017, bringing to a close Rugby Art Gallery and Museum’s programme of events and exhibitions exploring health and wellbeing, and the positive role culture can play in improving quality of life. There will be a celebratory event on the final day, drawing together the curator, exhibiting artists and others connected with the project.

Rugby Art Gallery are also commissioning Midlands-based artist Michaela McMillan to make a new work in response to both the exhibition and the overall seasonal programme themes. Michaela creates sculptures with strong narratives and says, “I use, discarded, broken, found and donated objects that are dismantled and reassembled.  The familiarity of many of the objects link to the narrative, they add humour on recognition, and a value is given to objects which would end up as landfill and unvalued.  There is a… healing and restoration process, which is used to inform stories of hope, recollection and escapism.” (The image below shows a detail of the work under construction and is courtesy the artist.)

For more information about exhibitions and events at Rugby Art Gallery and Museum, visit www.ragm.co.uk 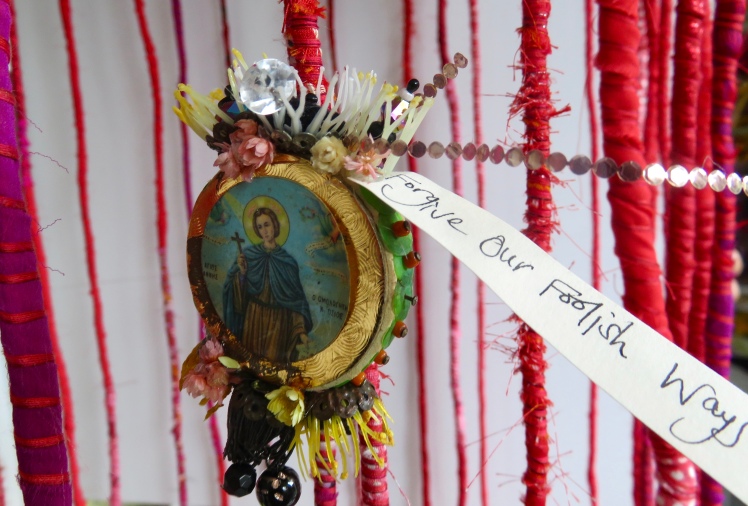