The Crafts Study Centre in collaboration with the International Textile Research Centre for Textiles presented my exhibition “What Do I Need to Do to Make it OK? ”  from 5 January to 5 March 2016. The exhibition included specially commissioned work using stitch and other media to explore damage and repair, disease and medicine, healing … END_OF_DOCUMENT_TOKEN_TO_BE_REPLACED

The project came directly out of my research in early 2008 for the Michael Swaine ‘Door to Door Darning’ project, and was an eclectic mixture of textile artists engaged in use of the actual darn, and other visual artists whose concentrated on community engagement projects, attempting to make things better for members of the public. … END_OF_DOCUMENT_TOKEN_TO_BE_REPLACED

Michael Swaine darns at the Alexandra Palace bus-stop, October 2008. Photo by Rob Kennard. This is an important project for me, in two ways. It was the first for which I received direct Arts Council England support, rather than via an organisation (although it was a feature at 2008 The Knitting and Stitching Show, and … END_OF_DOCUMENT_TOKEN_TO_BE_REPLACED

Back in April I mentioned this exhibition, which I’d just invited the maker collective Intelligent Trouble to work on with me. It’s been fantastically realised. All of the Intelligent Trouble collective and particularly Helen Carnac put a lot of thought and energy into it. The theme was jewellery in conversation and we programmed events ans … END_OF_DOCUMENT_TOKEN_TO_BE_REPLACED 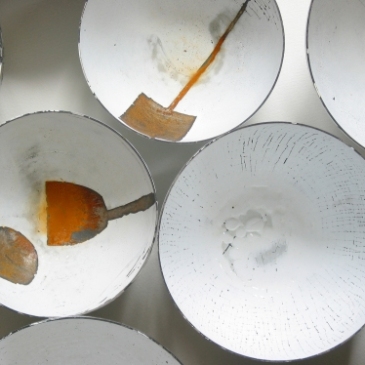 I met Helen Carnac and David Gates yesterday to talk about a new project I am planning for Bury St Edmunds Art Gallery and how we might find a way to work together. I’ve exhibited both David and Helen’s work in successive end of year craft shows at Bury St Edmunds in the last 18 … END_OF_DOCUMENT_TOKEN_TO_BE_REPLACED