Image: Detail of “First One’s the Best”by Celia Pym. Photo by Douglas Atfield. The exhibition What Do I Need to Do to Make It OK? will be on show in two very different locations in March: first at The Spring Knitting & Stitching Show at London Olympia from 2-5 March; then at The National Centre … END_OF_DOCUMENT_TOKEN_TO_BE_REPLACED 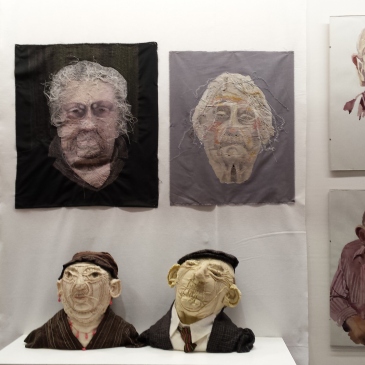 Image: Windfall apples from Renate’s garden on top of the family piano with her drawing materials. In 2014 I developed a survey project for The Knitting & Stitching Show, of work by textile artist Renate Keeping. This exhibition was initially developed as a retrospective after consultation with Renate, a former member of the 62 Group, … END_OF_DOCUMENT_TOKEN_TO_BE_REPLACED 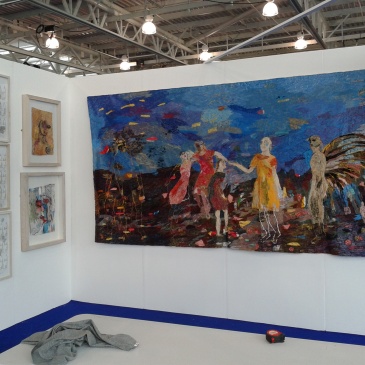 Image: Work by Alice Kettle at the Spring Knitting & Stitching Show 2013. More information to follow on Twisted Thread projects. As I’ve been installation manager for Twisted Thread since October 2002, I want to add in some historical information about this work. Every year there have been new projects, different artists and galleries to … END_OF_DOCUMENT_TOKEN_TO_BE_REPLACED

Really hard work but the gallery looked great and we had so many lovely comments about it. Great team working on it too – thanks guys. We brought works from around half of the artists in the original Netherlands show: Desiree de Baar, Kuin Heuff, Boukje Voet and Ton Zwerver from the host country; Peter … END_OF_DOCUMENT_TOKEN_TO_BE_REPLACED

This October we’ll be installing a selection of artists from the Holland Paper Biennial 2010 at The Knitting and Stitching Show at Alexandra Palace. I haven’t seen the show at the Museum Rijswijk yet but it sounds really good. I hope to get to the Netherlands soon. http://www.museumryswyk.nl/uk/